Before she made it big at Show Time, I had been a big fan of Vice Ganda even following her in Youtube and trying not to missed her rare TV Appearances.

To those of you who does not know, Vice Ganda already paid the Generals a visit sometime October last year. I never missed that chance of watching her live and free at KCC Mall of General Santos. (Click this about that stint)

Vice Ganda's First Show in General Santos City at the KCC Mall
From that day on, Vice Ganda had been a staple in every household here and abroad. To prove her popularity, Vice Ganda's followers on FaceBook reached millions in less than a month and even  filled the Araneta Colisuem on her first ever Major Concert tagged “May Nag-Text…Yung Totoo: Vice Ganda sa Araneta!” early this year.
A super duper big thanks to the kind hearted producers MANIO EVENTS MANAGEMENT , for they are bringing Vice Ganda back to the city by the bay as Bariles put it himself. Oh yes. We will be seeing Vice Ganda live and in flesh on June 27, 2010 at the Lagao Gymnasium people. I know you've been waiting for this. So do not miss the chance. Go and check out  “MAY NAG-TEXT! MAY SHOW AKO?” LIVE IN GENSAN. 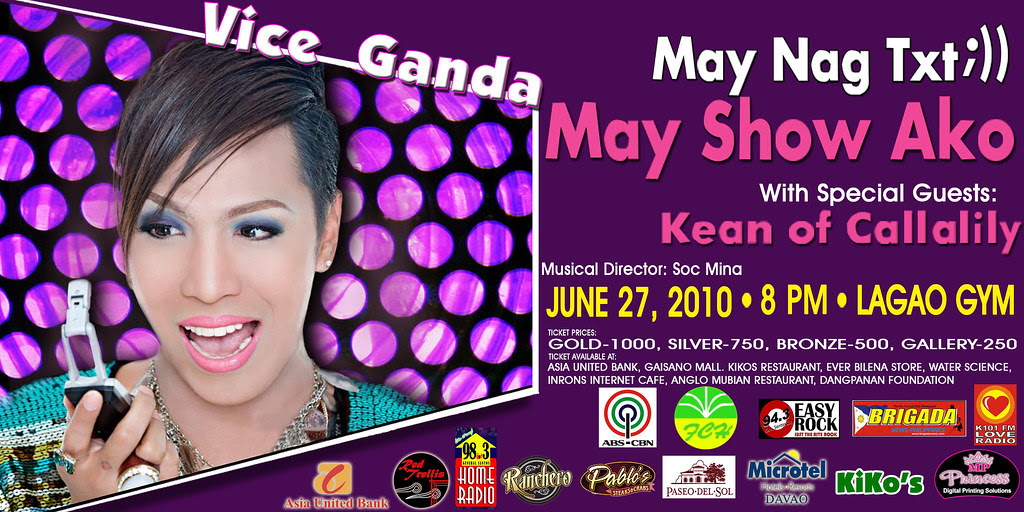 It sure is a night full of laughters and aching stomach with Vice Ganda on the 27th. May have mentioned that "With Kean of Callalily present as an icing to an already delicious cake will surely complete the set", but instead of Kean, Glady's Reyes*  will be replacing him.  Its a date then. Save up and treat yourself with a very worthy artist. You may choose among the following ticket prizes:
-  P250 (General Admission)
- P500 (Lower Box)
- P750 (Courtyard, Back Portion)
-  P1,000 (Courtyard, Front Portion)
Hugs and kisses to Bariles Republic for a FREE invite ;)
Special thank you as well to all the sponsors: Asia United Bank, Red Trellis, Rachero Grill and Restaurant, Pablo's, Paseo del Sol, Microtel Davao, Kiko's, MP Princess Digital Printing Solution, Family Country Homes, ABS-CBN, 94.3 Easy Rock, Brigada, K101 FM Love Radio and 98.3 Home Radio.
*Gladys Reyes got her popularity from a long running soap opera that made Judy Ann Santos Known as well, remember Mara Clara? Gladys is one of our favorite kontrabida in Phillippine Television. She was also once played kontrabida against Vice Ganda at SHOWTIME. If you enjoyed Vice's and Gladys' antics at showtime they sure will be enjoyable to watch on stage.
Posted by dimple at 3:36 AM